There is an Evangelical myth which comes up frequently when there is a discussion of Mormonism that is probably worth dispelling.  The myth goes something like this: in 1852 Brigham Young started teaching that God the Father and the Adam from Genesis were the same person.  Adam was an exalted mortal man who came with one of his wives Eve to earth, ate of the tree of knowledge to become mortal and begat human children.  This Adam later returned to earth to have sex with Mary and become the father of Jesus.  In the Evangelical timeline version of the story, Orson Pratt objected to this teaching and Brigham continued to teach it throughout his life, with most Mormons of the 1850-1870s believing this.  Later the church covered it up, and denied this doctrine had every been taught.   This incident proves that Brigham was a false prophet, and the LDS a false church.  To prove this rather substantial theory they present two pieces of evidence: a few second hand paragraphs with some scattered quotes from sermon records of the time spread over two decades, and the fact there are also several fundamentalist Mormon sects that still hold to a view that Adam was Elohim and physically impregnated Eve to start creation. And that is the extent of the evidence.

Conversely the LDS church's version of events initially appears less convincing.  What they argue is that Brigham Young gave several sermons on the divinity of Adam,  a popular doctrine called "Adam-God" developed from these sermons as a misunderstanding.  The mainstream church starting with Joseph F. Smith became aware of this folk Mormon heresy and tried to surpress it.  This folk Mormon theology did however pass onto splinter sects that broke off from the LDS like the FLDS and Apostolic United Brethren.   I intend to argue the LDS church's version is correct, they are telling the truth.  And not only do I intend to prove that but to further present evidence that what Brigham was actually teaching was neither terribly controversial nor original, rather mainstream Hermeticism.

The first thing that happens if one begins to examine evangelical theory is that the very words of Brigham Young in his quotes about Adam-God contradict the fundamentalist doctrine.  For example:
Even thinking of Elohim as a plurality of God's doesn't resolve these issues and I have yet to hear an evangelical define an Adam-God doctrine that is consistent with their theory and consistent with Brigham's quotes on the topic.  This in and of itself disproves the theory that the FLDS / AUB version of Adam-God represents the "authentic Brigham".  Brigham either contradicted himself and there was no consistent doctrine, or the fundamentalist version doesn't match his teaching.

But if the Mormon fundamentalist view is not what Brigham was preaching that leaves unanswered the crucial question; if Brigham didn't mean that Adam was Elohim what did he mean?  Brigham gives a crucial clue in those few paragraphs where he tells us he learned this doctrine from Joseph Smith.  Now we do know a lot about Joseph Smith's theology near the end of his life (see Mormonism as Hermetic Christianity part 3), he was a lifetime member of the Free Masons, studying Kabbalah and delving into Hermetic Christianity all three of which have a doctrine called "Adam Kadmon" that does fit with the Brigham quotes.

The story of creation in the Hebrew is extremely poetic.  Joseph Smith was aware of this, and in sermons of his he frequently complained about the poor quality of the English translation of his day (the King James Version) in capturing the nuances of the Hebrew for the introductory chapters of Genesis.  The issue for any translator is that various word plays in the Hebrew are impossible to translate into English.  For example when Adam and Eve eat the forbidden fruit they discover they are naked in English.  In Hebrew they ambiguously discover they are naked and/or cunning.  There is simply no way to be ambiguous in English between naked and cunning, the translator into English is forced into making an interpretation and suppressing the ambiguity.

In the same way there are problems with the tradition language regarding Adam. Adam is literally "the man", it also used by convention as a name of a specific person (Adam).  This convention breaks down in several places, for example in Genesis 1


26 And God said, Let us make man (adam) in our image, after our likeness (order is reversed from what is normally gramatical.  The word for image here is literally statue) and let them have dominion (verb tense indicates purpose) over the fish of the sea, and over the fowl of the air, and over the cattle, and over all the earth, and over every creeping thing that creepeth upon the earth.

27 So God created man (this time ha'adam literally  "the aforementioned man" ) in his own image, in the image of God created he him; male and female he created (created is in the singular, refers to a singular entity) them (them in English makes "created" plural which isn't capturing the Hebrew.  "It" would be standard English for singular so something like "it/them" would be needed here to capture the Hebrew).

etc...  In Hebrew there is a lot more going on that isn't in your English translation.   Hellenistic Judaism, which after all saw its mission as to reconcile Judaism with Platonic philosophy, dealt with this language by introducing the idea of a spiritual Adam, Adam Kadmon.  This spiritual Adam is an image of the ten sephirot (attributes of God).  The image to the right has thse marked off and associated with body parts.  A configuration of the sephirot (Partzufim) is in a platonic / Hellenistic Jewish sense a particular image of God, a conception like an avatar.  So Adam Kadmon is a way of talking about a will of God, the same way God's wisdom is made manifest in works like: Sir 1:1-18; 4:11-19; 6:18-31; 14:20-15:10; 24:1-31; 51:13-30; Wis 7-9; Baruch 3:9-38.    This spiritual Adam, doesn't have material properties like sex, so if you look at the image of Adam Kadmon at the top of the post, you'll notice that the model (Brittany Spears) is female. As such Adam Kadmon is the perfect image of the Logos.   The material Adam, the one in the garden, as well as Eve would both be a reflection of Adam Kadmon, in keeping with the Hermetic "as above so below".  So God -> Logos -> Adam Kadmon -> material Adam / mythic Adam.

This theology was fully developed by Philo and has remained part of Jewish mysticism since. It passed directly into primitive Christianity. Paul uses it casually in 1 Cor 15:45-50.  The idea is explicated in the Clementine literature, Jesus is the incarnation of the heavenly image, Adam Kadmon i.e. a materialization of the Logos.  Historically this idea becomes popular with the Elkasaites and other Gnostic Jewish groups and thus makes its way into Manichaeism where the 7 incarnation of Adam Kadmon are: Adam, Seth, Noah, Abraham, Zoroaster, Buddha, and Jesus.  From here no particular order it gets incorporated into Druze and Islamic Gnosticism where it makes its way back into Christian Hermeticism, which acts as an indirect base for Free Masonry. 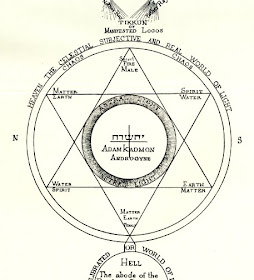 This doctrine did not however make it into mainstream Christianity.  Saint Augustine, wrote the definitive interpretation of those early chapters of Genesis.  That interpretation was based on the Greek bible (the Septuagint) which does not have the poetic ambiguity of the Hebrew, though it contains hints of it like the English.  His interpretation is the classic view: original sin and the fall, both of which Joseph Smith rejected.  While he is familiar with the Adam Kadmon view, being a former Manichean himself, he rejects it.

Joseph in teaching Adam Kadmon would have been teaching a lost doctrine of early Christianity (at least of some major sects) that is engaging in Christian restoration.  His belief in this doctrine would be fully consistent with the "bible is true in so far as it is translated correctly" as this is a doctrine which comes directly from a good understanding of the originals.   This doctrine justifies many of his other theological shifts.  And the doctrine isn't even much of a stretch since, the idea of a heavenly Adam can easily be thought of as the "spirit child Adam".

I think it not just possible but likely that Brigham was preaching this, but being a bit loose on a few occasions about distinguishing between Adam Kadmon and material Adam.   What's more Adam Kadmon in Judaism is the father of all human souls, which is Elohim's role in traditional Mormonism.  As mentioned above Adam Kadmon is seen as either the father of the earthly Jesus, or earthly Jesus is an incarnation of Adam Kadmon.  And equally material Adam is either the son or an incarnation of Adam Kadmon.  So I can easily see how the roles in a few paragraph summary of Brigham's sermons got muddled.      For example in the December 28 1845,  Adam-God sermon Brigham talks about how Adam got his name from the "more ancient Adam", which would be confusing to anyone not familiar with this doctrine.

So for example:
And so I propose:

a)  That Joseph Smith ran across a very mainstream Hermetic Christian doctrine in his studies.
b)  That Joseph Smith taught this theory to Brigham.
c)  That Brigham gave a few lectures on it over a period of decades, but did not cite the Hebrew.  Rather he used terms like "father Adam" for Adam Kadmon and Adam/"our father Adam" for material Adam.
d)  Because he did a bad job explicating this theory, the roles got muddled in the reports of these lectures and a folk Mormonism developed with these muddled roles / theology.
e)  The muddled roles got passed on to fundamentalist sects and codified.

Is all you have to believe to fully believe the LDS church's version of events.  What I would suggest is go back and read Brigham's reported sermons with this doctrine in mind, and you'll see how they suddenly make sense.

The next question is, why the opposition from Orson Pratt at the time?  Well the primary argument the two had was their respective theologies of exaltation.  Brigham saw it as progressing in quality, while Orson saw it as progressing in terms of quantity.  That is for Brigham God continues to progress in what he knows while for Orson the progression is in terms of his domain.    Adam Kadmon himself is timeless, eternal, non material. He is a divine creator of human life but unquestionably subordinate to the Logos and from there to Elohim.  In other words the doctrine of Adam Kadmon from a Mormon standpoint requires belief in Brigham's not Orson's theory of eternal progression.

Consistent with this, Orson was the primary advocate of Mormon Materialism (post on this topic), the doctrine that everything including the spiritual was matter that was simply re-organized by God.  The Adam Kadmon theory posits a non material Adam, cutting out the heart of Mormon metaphysics for Orson.    Moreover a non material image of Adam, certainly leads to returning to a "God without passions or parts".  Mormonism is an incarnational theology, Adam Kadmon is inherently adoptionistic.  Orson could have been concerned about the difficulties of reconciling adoptionistic view of Adam with a material view of the Godhead.    This view of Adam would have presented no problem for early Christians that supported adoptionism.  Moreover, religions like Judaism, Islam, Druze and Hermetic Christianity are adoptionistic in their view of all prophets strongly disbelieving in even the possibility of an incarnational theology in the orthodox Christian sense.  So Orson's objection is understandable.